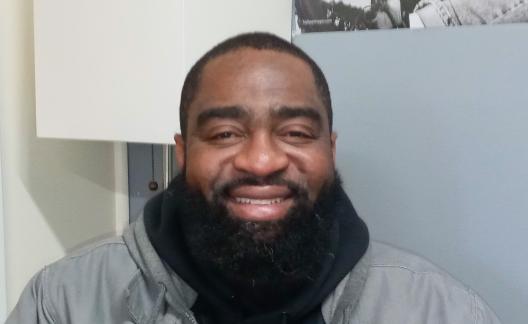 Our clients come to RS EDEN for many reasons and a variety of backgrounds. However, what every individual or family will always find, is the support and commitment from our staff and agency to reach their individual needs and goals.

Vinson is one of our clients who has been generous enough to share his story and the impact RS EDEN has had within his life. He came to RS EDEN just over a year ago and moved into Alliance Apartments after a turbulent time in his life.

Before coming to RS EDEN, Vinson had relocated from Florida to Minneapolis. Here he was able to utilize his background in construction and plumbing and found work in property management and maintenance. Together he and his girlfriend Katrina shared a townhome with their infant son. He had found a level of success and things were going well.

Both Vinson and his girlfriend had other children from previous relationships. At one point, Katrina’s adult daughter, who was pregnant, came to live with them. During a trip to a store, Vinson became aware that his girlfriends’ daughter had shoplifted from the store and became angry she would do something so reckless and unnecessary. An argument arose and the authorities were called. Once they arrived – the situation presented as a black man yelling/threatening a pregnant white woman and Vinson was taken into custody. After the situation had been investigated and reviewed all charges were dropped but a No Contact Order was put in place. This also meant, Vinson couldn’t see his son.

The bigger issue was, Vinson had several misdemeanor charges previously (all dismissed), but they were still on his record, and when another charge was added, this escalated to a felony. His relationship with his son was everything to him. And knowing that Katrina was struggling with her dependence to Percocet – Vinson knew he had to do whatever he could to be with his son, so he asked authorities “what can I do to get this off me so I can be with my son?”. It was a huge decision, but Vinson was offered and accepted a 21-month sentence followed by parole to clear his record to be with his son.

Vinson did his time and was ready to start over. He moved into Alliance Apartments on July 21, 2020 and plans began to be put in place to reunite his family. With the support of RS EDEN staff, Vinson secured housing for himself and began to re-establish a relationship with his son. Together, he and Katrina put a deposit on an apartment, and it appeared they were about to begin their lives reunited as a family. What Vinson wasn’t aware of was, Katrina was still struggling with her chemical dependency. On the night before they were to move into their new apartment, Katrina left in the middle of the night and decided to “get a head start” of packing up at her home and be ready to move the next day. That would the last time Vinson would see Katrina – as she overdosed on fentanyl, and it would take several days for her to be found.

During this period, Vinson’s son lived with his maternal grandmother in Duluth as Vinson mourned, put his plans in place, and began to move forward. RS EDEN staff worked to assist him stay connected with his son, process through his own struggles, as well as how to achieve his goal of “all I want is my son with me”. It was during this time that RS EDEN staff told him about Portland Village – an RS EDEN community of 24 family units, providing a safe, recovery-focused, affordable housing situation to assist with family and housing stabilization. Vinson applied – and amazingly an availability came up in just two weeks! “I’m in one of the best situations right now – there is a goal and prayers are working.” It has been a long and difficult journey, but with the support of RS EDEN staff, our programming and various supportive housing options, Vinson and his son will begin their lives as a family in Portland Village.